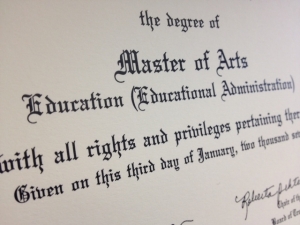 This blog is called Principals In Training (PIT – nice!).  It’s not meant to be a play on words (“Principles” – though, that’s also a cute title!), rather a space to talk about what it takes to become an effective school leader in a 21st Century context.   So what about the training I got to license/prepare me for my current job?  How effective was it in getting me ready for my role as a site leader and future principal?

Would the answer “Not at all” sound too harsh?

Yes, too harsh.  Of course my two-year Master’s program exposed me to people and ideas that continue to inform my practice and perspective.  My State-mandated Tier II training (40 hours of seat time coupled with many more work “modules”) for credential renewal had a great technology component that was my first foray into using Google Docs and experimenting with asynchronous, 2.0 work.

But much of that “training” focused on preparing for the technical aspects of school management.  Very little of it accounted for foundational work every leader must undergo at their sites to deliberately, consciously create a professional, safe climate of student-centered collaboration, collegiality, and ongoing learning – a place where complexity is embraced and people focus on their points of convergence rather than their inevitable differences.  Very little focused on developing empathy, vulnerability, engaged listening, and genuine question-asking – all domains that are skills to be developed, not innate traits we either have or don’t have.

I repeat – fostering healthy interpersonal dynamics is a teachable, demonstrable, measurable, and practicable skill.  Yet I spent more time in my Master’s program learning to write a FRISK-style disciplinary document than I did practicing and developing this key leadership trait.

I don’t mean to be unfair – no training gets us fully ready for the “real deal.”  We all learn and grow by doing (including our students!).  Let’s make a quick basketball analogy: you can take 100,000 shots in the gym, lift tons of weights, wake up at dawn and run hills, watch games on television like a film critic preparing for their article in the Sunday paper…but none of that can simulate what it’s like to play a real game, at full speed, with 1,000 people in attendance against opponents that have done all the things you did (maybe other things, too) to get ready.  Your record might be 100 straight free throws made during your practice time; all of a sudden, after the hectic pummeling, jumping, scrambling near-chaos of a real game, a free throw feels quite different.

So how would I organize a program to prepare school leaders?  I started thinking about the domains we would need to address, keeping in mind that much, still, will be learned on the job.  How many domains?  Five? (A good basketball number!)  Each domain would have five guiding questions that would serve as the “practicum” component of the course.  Here goes:

I will elaborate on each domain in future posts.  My gym sneakers are brand new and ready to be put to use!

One thought on “Leadership School 2.0 – My Course Catalog”