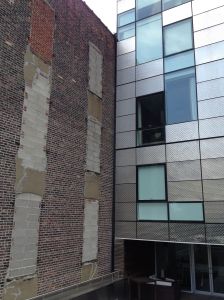 We recently took a family trip to New York, our first long-distance, on-a-plane adventure with our two girls.  We were graced with our first on-the-airport-floor tantrum about 20 minutes past security check on the way there (no, it wasn’t me!).  Vacation would be boring if it were easy!

Something struck me (other than the heat, humidity, and full-bore meltdown of kids and adults due to said  heat and humidity!) as we were walking on the High Line, the incredible park constructed on top of the elevated cargo rail line on the west side: New York City is layered like the modern American school.  Old and new are crammed together in a continuous, never-ending process of creation and re-creation.  New asphalt is spread like frosting over centuries-old cobblestone; work crews disappear underground into sewers and tunnels or spend their days 1,000 feet in the air on a new skyscraper.  You can feel the city crumbling and shifting underneath your feet as you watch futuristic buildings sprouting up alongside something built in the 1800’s.

I took the picture above from the High Line (one of the most unique features of the park is the proximity it affords to the buildings around it – though I am positive that the residents are a little miffed that tourists can stare into their balconies and kitchens!) and it probably renders as frivolous all the words in this post because it is the perfect visual metaphor.  This collision of old and new is just a small little corner of an enormous city, but I’m hard-pressed to find an image that says it better.

We educators often work in buildings that date back 50-100 years (or more).  They may appear the same from the outside, but the realities of the 21st Century have created huge changes in what schools look like on the inside – not to mention what happens inside of schools!  Change is a never-ending truth that shapes our lives – as people, as professionals.  Our schools will change even if we don’t adopt any new curriculum or have any staffing changes for 20 years; people will get older, new crops of students will come and go, stuff will happen in the world that will shape the daily dialogue in classrooms, staff rooms, offices, and hallways.

By accepting change as the constant (rather than being scared of it), we can be deliberate about what older practices we sustain, and what shiny, new paradigms we introduce into our ecosystem.  Old doesn’t mean bad; new doesn’t mean good.  The High Line itself is the best metaphor of all – a new public open space dedicated to recreation and art, built on top of an almost century-old rail line. Most incredibly: it was due to be demolished before some neighbors dedicated themselves to transforming it into a community resource.

So…what needs preserving at your school, and what needs to be transformed – or removed – so that something beautiful can grow in its place?