The toughest part about getting your ideas out there might be picking which one to share (eat?).

How does an idea go from seedling to sprout?

Katy Foster and I discussed a similar idea exactly one year ago at Fall CUE. Here are the resources to “How Good Ideas Spread” and a summary post on our talk (eek – including the video).

A lot has happened in a year. In late fall I started connecting with teacher/podcaster Scott Bedley to talk about homework. Then I mentioned that Curt Rees had told me about the keynote speaker at IntegratED 2014, Dr. Peter Gray, who discussed ideas from his TED talk on the decline of play. So then Scott tells his brother Tim, and a lava-hot idea goes off in his head and basically Global School Play Day (#GSPD) popped into the world like so much bread from an overly-wound toaster. Hey, even closing keynoter David Theriault gave it a mention as an example of channeling the spirit of Steve Zissou: #thisisanadventure.

All of that took about one month. The only person I’ve met in person is Curt, for about two hours. A good example of #ideaspread!

Scott and I collaborated (again, virtually) for this year’s Fall CUE session titled: “Amplify Your Ideas to Make the World Better” (really modest one there). There were NO session resources offered ahead of time other than the #GSPD website for one simple reason: the session was all about the people in the room sketching out their own ideas, getting feedback from local (in the room) and hopefully virtual communities, and basically beginning the cycle of seedling to sprout.

Not gonna lie, was a little disappointed to see this face on a screen rather than in person! #fallcue @Scotteach pic.twitter.com/EqXDSfgdvW

Don Quixote’s name popped up a few times during our conversation. Offering an idea means taking a risk; will people think it’s stupid? Offensive? Unprofessional? An act of sabotage to the well-established norm/homeostasis? The answer is, in part, YES – some people will. This can leave us feeling like the Don of yore “tilting at windmills” – seeing a truth that no one else can (or is willing) to see.

We established four key themes together in our conversation about HOW we amplify our ideas. Notice how none of these tenets are tools or technologies; they are all mental/emotional/relational frameworks: 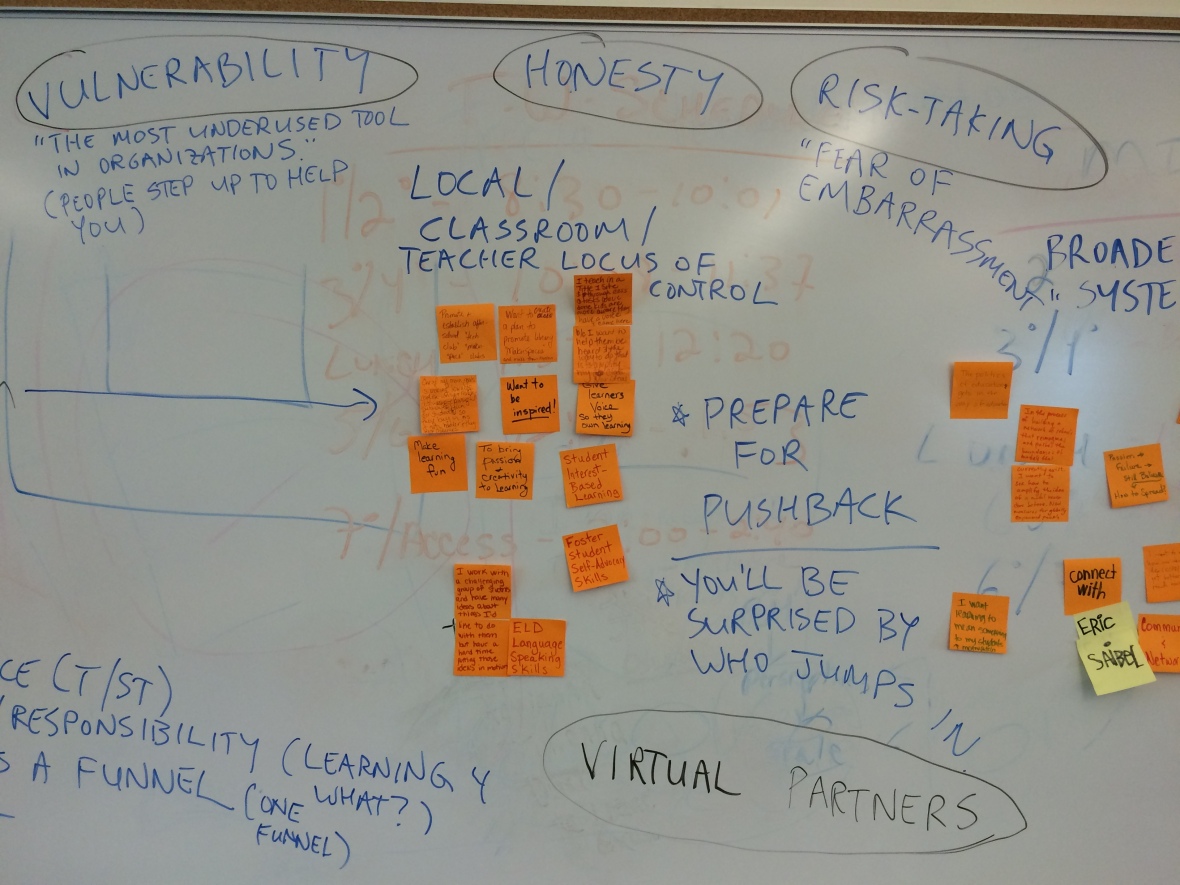 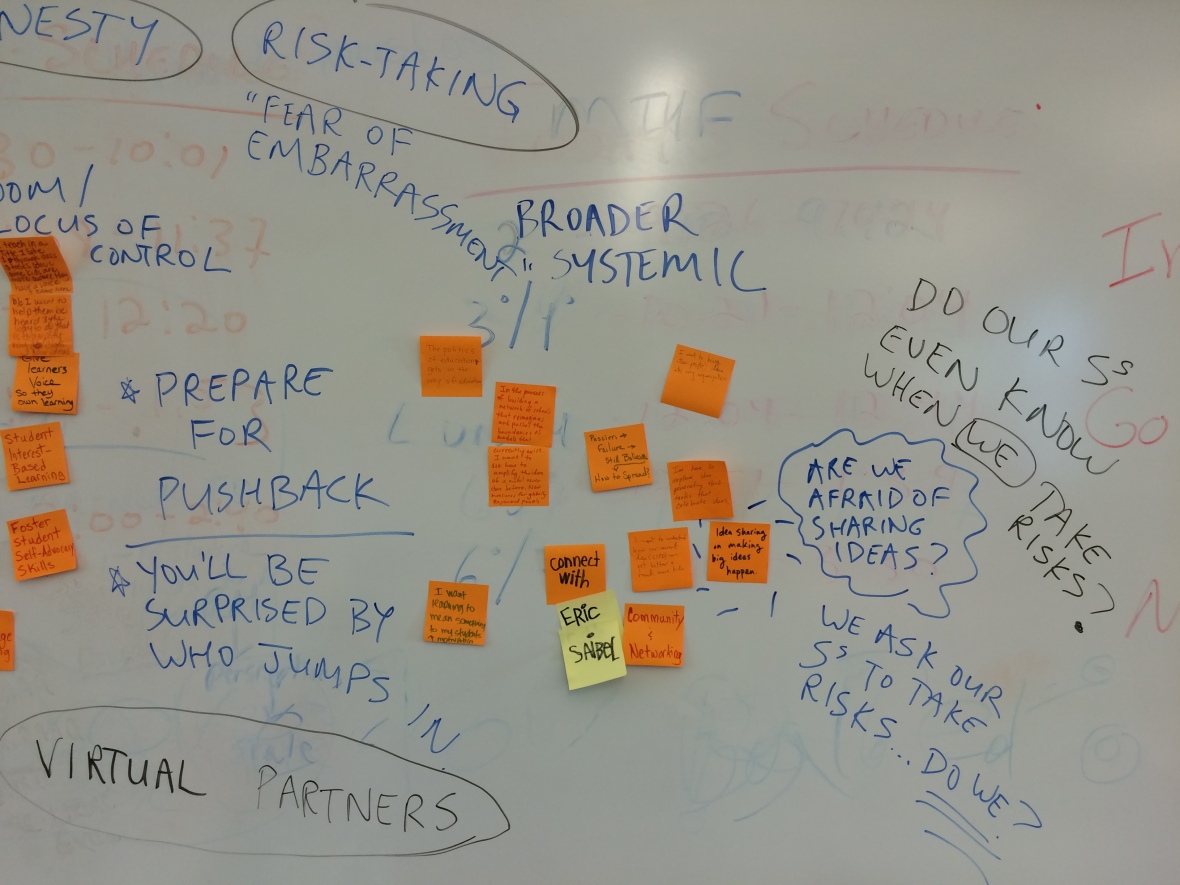 Scott summarized the mindset we must adopt when putting ourselves out there: “Prepare for pushback AND prepare to be surprised by the people that take an interest.” When we are brave (crazy) enough to put an idea out there, we risk alienating people we are close to; we also create the possibility that people we aren’t close to – or people we don’t know, period – take up our idea and carry it forward (and maybe become our new friends too).

Environments infused with joy and play…are not only better engaged, but have more creative, innovative ideas. #amplifyyouridea #FallCUE

We have to reengage the mind as a playground…a place where ideas constantly come out to play with each other. #amplifyyouridea #FallCUE

"Why aren't our conference rooms and board meetings as vibrant as childhood playgrounds and sandboxes? -S. Berkun #amplifyyouridea #FallCUE

Play is as important for adults…as it is for children. Both mentally and physically. #amplifyyouridea #FallCUE

Here is the Google doc listing contact information for the session’s “amplifiers” as well as the seedlings they want to nourish. I urge you (reader) to connect with them if you see ideas you care about as well. Pretty much the only person Don Quixote had to run his ideas by was his sidekick Sancho Panza; 500 years later we have a bit more agility when it comes to finding folks that not only share similar ideas, but also contain an equivalent fire within to create new ways of thinking, doing and sharing in education – and beyond.

Just a few hours after posting this I noticed this tweet from George Couros; I think it captures the spirit of how we amplify ideas quite well.